For my previous posts on this trip:

On Day 6, we visited a project located at the Mathare Valley Slum on the outskirts of Nairobi.

We were advised not to take pictures while walking on the street for the sake of our safety. These pictures above were taken from our van later on on our way back.

When we arrived at the project, we were led to the front seats of the church hall to enjoy a series of performance by some of the most inspirational kids/youth who attend this project. They are all gifted and talented in different ways. 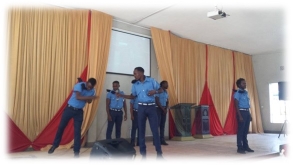 These are Compassion alumi (photo on left).

We were told that as soon as they heard of our visit, they wanted to meet us, so they decided to come back to the project and do a special performance for everyone. All the kids in the project were so excited. They were screaming like some fans seeing their idols performing on stage. The ecstatic atmosphere made me feel like that I was in a concert hall rather than a church hall.

Later on we were told that now these alumi are actually a famous group of stand-up comedians in the country and they often appear on television, go on touring and give live performance at different venues, etc.

After the performances, we then followed the director to the office building where he introduced to us some of the staff in the project.

They explained to us the works they do and the challenges they were facing in the slum while we were having some lunch provided by the project.

Just like the previous days, after lunch, we divided into small groups for home visits.

“The Blessing Hotel”- the green shed-like structure in the background

As we walked through the streets of Huruma, part of the Mathare Valley, I was astonished by the number of residents in this area where the living conditions were extremely poor.

I remember walking past some flimsy buildings thinking how dangerous it would be if they collapsed.

The front yard of the homes

What really struck me was that a few days later after I left Kenya, while I was watching the news on TV at home, there was a news report about a residential building in Huruma collapsed during a heavy rainfall, trapping many and among them dozens were killed.

As you can imagine the incident was so devastating to the point that it even made it to television news overseas.

I was really distressed by it especially after just being there a few days ago meeting some of the most amazing kids and teenagers at the project.

Even though living in such poor conditions
where everyday is a challenge,
they continue to stay resilient
and positive about the future…

…though the future is not for anyone to see,
they hold on tightly to the hope they profess,
because they know what’s promised,
will be delivered.