“What is to become of this country?” Fred Smith cried out in anguish. 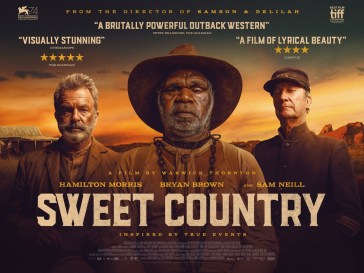 Plot (Wikipedia – Sweet Country (2017 film)):
Sam is a middle-aged Aboriginal farmer in the outback of Australia’s Northern Territory. He is sent by a preacher to help a bitter war veteran named Harry to help renovate the latter’s cattle yards. Sam’s relationship with Harry quickly deteriorates, resulting in a fight ending with Sam killing Harry in self-defense. For the murder of a white man, Sam is now on the run from the law with his wife across the deadly outback. A manhunt for the farmer is on, led by Sergeant Fletcher, but questions of justice start to surface among the community as the true details of the murder come to light.

For many, Sweet Country is a film that tells Australia’s bitter history. A film that depicts the abuse and inhumanity of the Anglo-European settlers towards the local Indigenous people in the country’s early days. A film that deals with the issues of injustice and racial discrimination. A film that, at its core, intends to raise awareness of the historical prejudice and the mistreatment of Australia’s first people.

These are all valid statements.

But to me, as an active audience and an “over-thinker” who tends to over-analyse and think beyond my feelings of what is on the screen, I would like to think that there is actually more that we can take in from this film.

Sweet Country is a reflection of humanity. Humanity in a broad sense. It’s a film that pricks one’s conscience.

“We are all equal here. We’re all equal in the eyes of the lord” Fred Smith, a kind, god-fearing preacher and landowner, told a man at the beginning of the film.

The story was set in the 1920s in the Australian outback, a bygone period when the indigenous people, the “blackfellas”, were regarded as property owned by the “whitefellas”, and were treated brutally like slaves.

There’s a scene in the film a teenage indigenous boy was chained up by the drunken white landowner overnight for no reason.

Now a flash-forward to 2018, didn’t we recently hear about two parents chaining up their children to their beds in the United States? And that certainly is not the only case uncovered in the last decades.

And then there’s this scene in which the same man raped the Aboriginal stockman’s wife violently as if she was only a lifeless doll for him to pleasure himself with.

Don’t we see this kind of savage behaviour still prevails in 21st century in the form of domestic violence?

Regardless of race, how can a person be so cruel to another person? What is it that guides our attitudes and actions towards our fellow beings? Our conscience? Or is it our pride and ego?

People change as time passes, but in essence, do we? Are we, human beings, as the British philosopher John Stuart Mill believes, “progressive beings”? Or are we, as another British philosopher Thomas Hobbes suggests, cruel, greedy and selfish by nature?

In a lawless country like Sweet Country, a depiction of Australia’s early days when the local indigenous people were treated as nothing more than slaves. Now, we live in a modern society ruled by law, most people are law abiding citizens, but sometimes in situations where laws are irrelevant or vaguely defined, such as in the case of “hate speech”, we still see people treating each other with malice and meanness.

We may all be created equal, but the brutal reality is that we aren’t equal in each other’s eyes. Regardless of race, people show partiality and hold prejudice to other people all the time.

Amidst the beauty of the vast landscape of the Australian outback, though there are kindness and compassion found in some people, such as in the kind-hearted character Fred Smith depicted in the world of Sweet Country, one cannot ignore the existence of hatred, cruelty and violence.

It is like sugar-coated tablets. The bitter taste of the drug is concealed by a layer of sweetness. But we all know the bitterness is still there.

History is a fact. And the future is shaped by the past. If we cannot acknowledge the past and reflect on ourselves, how can we move forward?

Sweet Country is a film that shows humanity its own shame. A film that intends to prick our conscience, with the hope to rebuild ravaged societies and human relationships.

“What is to become of this country?” Fred Smith cried out in anguish at the end of the film.

That’s the question directed to Australia.

But to the rest of humanity, the question is…what is to become of us?

*Sweet Country opens nationally on the 25th January, the day before Australia day, and then released internationally in March.